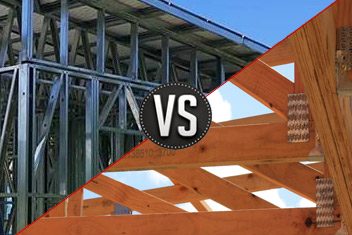 Anyone who considering what structural frame to build with will probably want to compare it to the alternatives, principally brick and block construction. Generally speaking, no one system of construction is inherently better than another because it depends upon the requirements of a project and the preferences of the owner/builder, as well many other factors such as the location and constraints of the site.

One thing that most construction professionals agree on is that if a prefabricated timber frame is the time that it takes to construct a house on site can be quicker than a traditionally built house of standard steel, brick and block construction. This is because the timber frame is usually erected on site by the supplier’s own carpenters, in a matter of days rather than weeks. Seven to ten days is a typical time from the arrival of the specialist construction team on site to the frame being up. It is very rare for a modern timber frame to suffer from rot. External timber elements, such as cladding and fascia boards are prone to rot if not well maintained, but the actual frame itself is well-protected. Quite obviously, timber can burn, whilst some of the alternative materials such as masonry and steel do not. This may lead to the hasty conclusion that timber buildings are not as safe in the event of a fire as a steel frame, but the real picture is not so simple. The progress and level of destruction of most house fires and the likelihood of death or injury are mainly determined by factors such as whether there are smoke alarms fitted, the habits and behaviour of the occupants (for example whether they smoke), and the flammability of the contents of the house.

Frequently used in commercial construction applications, steel building frames were largely overlooked in residential construction for many years. This is slowly changing as homeowners and builders embrace the safety advantages and increased durability of steel framing. While steel framing does have advantages, it has some drawbacks, as well — most notably its poor insulation ability. Steel framing also requires some special tools and know-how to construct. Perhaps the most significant benefit of steel framing is its durability. Unlike traditional wood framing, steel does not warp or expand. It is also better equipped to deal with water damage, since it does not rot and is highly resistant to fungus. Steel is also completely unappealing to termites, carpenter ants and other insects that feed on wood. Despite its many benefits, steel framing is not energy-efficient. Steel conducts heat 300 to 400 times faster than wood, reducing the insulating properties of wall insulation by 60 percent. This occurs due to a phenomenon known as thermal bridging, in which heat takes the most conductive path. The most conductive path in a steel frame home is the steel itself, and heat will move quickly from inside your home to the steel studs in the walls. You can combat this energy loss by using extra insulation or insulation materials with a higher rating. Spacing the steel studs further apart in the walls also helps by creating fewer thermal bridges.

Thinking of getting a deck?